Sandra chaired a memorable meeting and introduced Michael van Wilgenburg who is training to be a competitor in the Special Olympics to be held in Melbourne between 20th October 2014 and 25th October. Born in India 18 years ago, Michael’s parents hail from the UK and Holland and his father Hans has had a swimming background and is Michael’s coach and keenest supporter. An enthusiastic Bulldogs supporter, Michael completed a physical education course at Footscray and established a keen interest in Track and Field athletics. He became a competitor with Special Olympics Australia representing Victoria in the Trans-Tasman games in Cairns in 2012 and the inaugural Asian Pacific Games in Newcastle in 2013.
His aim is to represent Victoria at the National Championships to be held in Melbourne and go one step further and be an Australian representative at the Global Special Olympics in Los Angeles USA in 2015. The vision of the late Eunice Kennedy Shriver in 1962, whose sister Rosemary suffered from a disability, saw the birth of the Special Olympics movement to support young people with intellectual disabilities which spread to Australia in 1976 and now globally covers over 300 countries. 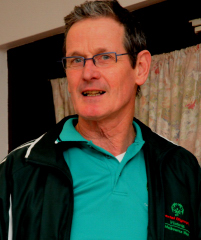 Hans van Wilgenburg spoke of his introduction into the Special Olympics movement which started with a product promotion at a primary school where he worked as an integration aide which led to the local swimming Club. He realised the development of confidence and social skills in Michael would take him down a path of increasing independence that would address real concerns of parents as to what the future would hold when they were no longer around to help. Volunteers were always in demand and the association provides an opportunity for parents, carers and children to meet and gain confidence through their mutual interests and bond together in pursuit of their mutual aims. The Special Olympics Oath “Let me win. But if I cannot win, let me be brave in the attempt” has a resonance with the ideal of the father of the Modern Olympics in1896, Baron Pierre de Coubertin when he wrote: “The most important thing in the Olympic Games in not winning but taking part; the essential thing in life is not conquering but fighting well.” Michael is faced with the challenge of raising $2,600.00 to compete in the National Championships and further details are located at www.specialolympics.com.au
Reporter Barrie Williams 23rd July 2014