Past President Stan Gorr skilfully managed the usual suspects at our meeting to make the Jim Lloyd and associated presentations to graduates from Melbourne Polytechnic (formerly NMIT Heidelberg) in the absence of our Beloved Leader Neil Watt due to ill health. PP Barrie Williams provided some background on Jim and why the Club felt it appropriate to recognize his memory with the Award.

Using Google as a benchmark, Barrie observed that, whilst “Jim Lloyd” had produced no results, there were some inconsistencies with regard to others – Swede Alfred Nobel invented dynamite and profited from munitions but set aside funds for a perpetual Peace Prize and Englishman Cecil Rhodes made a fortune exploiting the diamonds of the Kimberley in Africa, completed his education at Oxford but set up the Rhodes Scholarships for like-minded sons of the British Empire to go to Oxford and rule the world. Barrie hoped that future researchers in Google might be more successful when looking for “Jim Lloyd” and have some appreciation of the respect in which he was held by those whom he knew and the journey which he had travelled.

Jim was born in 1926 and grew up in Preston. Upon starting primary school, his family became part of the Great Depression and his secondary schooling took place at Preston Technical School (now part of Melbourne Polytechnic including a five year apprenticeship) during WW2. Jim married and had three sons, two of whom (Rob and Wes) were present on the night.

A member of the Rotary Club of Heidelberg during the 1960’s, Jim became a Charter Member of the Rotary Club of Heidelberg North (now Rosanna) in 1973 and its third President. He was always a “hands on” Rotarian. From the weekly commitment to a lunchtime meeting at Heidelberg whilst running his own family plumbing business to the installation of a “dunny” in West Heidelberg for a widow in need. The poignant story of the death of PP Stan’s baby daughter Wendy when Jim arrived to cut the grass was typical of many “Jim” stories where he did small things but many of them. Jim died in 2007 and the Club decided that this annual Award should be made to a Plumbing Apprentice from Melbourne Polytechnic who would be recommended by the Institute through Supervisor Brent Comerford. 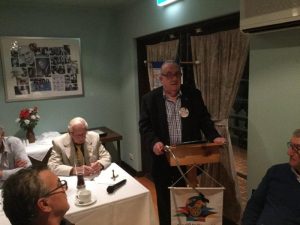 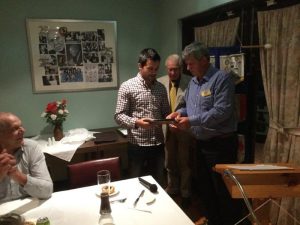 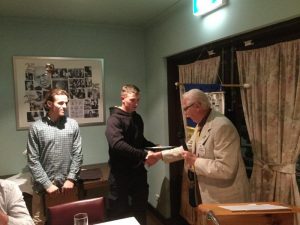 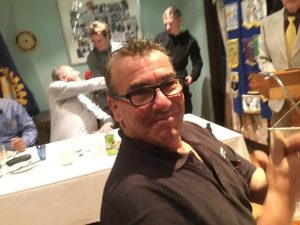