Brian spoke about how Rotary Connects the World. On End Polio Now which started in 1985, now $1.2 billion people have been immunised. 53 cases  of polio have been confirmed currently with Pakistan having 40 and in Afghanistan only 13. If we don’t knock off polio in 10 years well have 200000 cases again.   This is not just the work of Rotary, but it was started by Rotary.

Another example of connecting the world was a Rotarian in Bribie island organise a global grant $1000 and then got another 99 clubs to join the program making it $US100,000 and then the district made contributions and it became a global grant. Then Rotary foundation made a matching grant  and all up raised $USD328,000 from that first idea. This meant that 28,000 women were vaccinated against HPV because of that one idea.

In 1973 Ian Scott who joined Rotary and took an idea to the Rotary Club of Mornington who was distressed about babies dying from SIDS. It took several years, but this idea became Australia Rotary Health. The incidents of SIDS was reduced 84%, all because one person took it to his Rotary Club.

These are just a few examples of how Rotary Connects the World.

He mentioned that we don’t get the word out there enough to let people know what Rotary is.

Rotary members are declining so we need to ask ourselves why.

Even though we are bringing in new members, members are leaving as well for one reason or another. We can improve our numbers in 4 ways. Increase our impact, expand our reach, enhance our engagement and increase our ability to adapt. 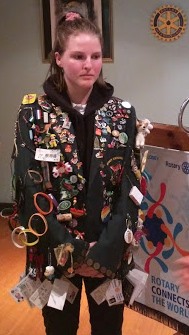 It allows a way to help exchange students for the future and offering support while they are on exchange and taking them on safaris, special events and learning about our culture. They are partnering this year with HeadSpace supporting mental health in youth. 75% of mental health issues fall between the ages of 12 and 25 years old.