Following the horrendous bushfires of 2019 which not only left many areas in a state of disaster, but also exposed significant gaps in bushfire preparedness, prevention and fire fighting capability. Cudgewa in the Upper Murray Region found themselves without both water and electricity during the fires, which prevented any real response as the fires approached.

Rotary Clubs stepped in to help with many needs around bushfire ravaged areas with fencing, livestock feed, assisting families with immediate needs of food, clothing and other necessities. 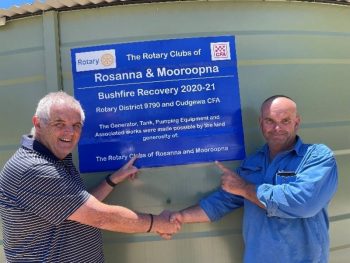 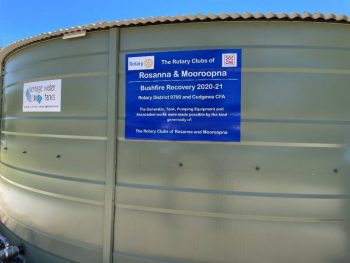 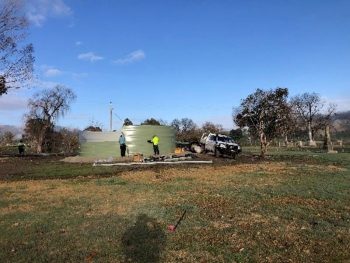 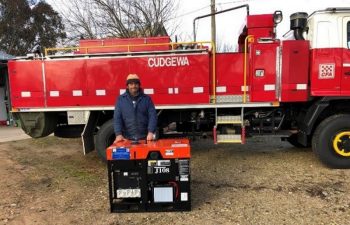 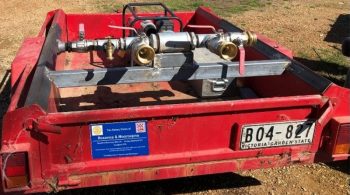 However, in the aftermath of all this, focus turned to preparedness, prevention and capability.

An area of need in Cudgewa was identified by the local CFA Captain, Paul Carkeek. The lack of water and power during the bushfires needed addressing urgently.

Along comes the Rotary Clubs of Rosanna and Mooroopna who both stepped up to provide  –   a new water tank installation (135,000 litres), a large capacity generator for power at the CFA depot and pumping equipment to transfer water from the tank to their vehicles.

A very grateful CFA Captain, Paul, was ecstatic with his new equipment and increased capability that their brigade now has for their fire fighting abilities.

Paul was delighted to say that we have increased our town water supply by over 50% and given the ability now to pump water for themselves with independent power supply and pumping capability.

“When a fire hits, you’re not thinking straight as it is and this new equipment and water is a tremendous boost to our little town,” Mr Carkeek said.

“Instead of racing around to find resources for fire fighting, we now have them all at hand.”

Mr Carkeek said that he fought his emotions as he saw his dreams coming to fruition.

“It will certainly help us with any future fire threats.”

“The generosity of people in Rotary from Rosanna and Mooroopna in providing these much needed resources really is something else,” Mr Carkeek said. “It’s just fantastic.”

Mr Bushby and Mr Carkeek had never met prior to the signage installation and the completion of the work, which has also given great confidence to the local communities around Cudgewa.

Rotary Clubs are providing a huge amount of much needed support and assistance to the fire ravaged communities in the Upper Murray Region with donations, workers, fence building, feed and many other tasks to assist with the recovery.